Owning a Royal Enfield bike is every bike enthusiast’s dream. If you plan to bring one of these bikes home this year, don’t forget to get it insured. Liberty General Insurance offers you a range of two wheeler insurance policies that can protect you and your favourite bike against any unforeseen financial liabilities.

Royal Enfield is one of the most popular brands in India. It is often synchronous with style and owning a Royal Enfield is also synonymous with a sense of pride. The company was founded in 1901, but it would not get its real identity till 1955.

Royal Enfield has a tagline of "the oldest global motorcycle brand in continuous production". It was conceptualised as an apt motorcycle for India’s army and police to patrol its borders. However, the brand’s journey began as the dream of two brothers who wished to manufacture motorised bicycles.

The first Royal Enfield motorcycle was designed by Bob Walker Smith and a Frenchman, Jules Gotiet. It had a 11.2 BHP making Minerva engine which was mounted in the front of the steering head. The rear wheel was driven by a long rawhide belt.

The most recent launch of the company are the 650 twins which included the Continental GT and the Interceptor 650. Both the motorcycles share a 650CC, twin-cylinder engine which makes 47BHP of maximum power and 52Nm of peak torque. However, it isn’t the first time Royal Enfield has experimented with twin-cylinder engines.  Royal Enfield’s first V-twin was a 297cc Swiss-made Motosacoche engine which was launched at the Stanley Cycle Show. It received critical acclaim and won many competitions, including the John O’ Groats to Lands End Trial.

Currently, Royal Enfield has showrooms in more than 50 countries. It even surpassed the global sales figures of Harley-Davidson in 2015. And if you’re interested in putting that Leh-Ladhak trip on a Royal Enfield on a bucket list, you may also want to consider opting for a comprehensive two-wheeler insurance policy from Liberty General Insurance and also know when you can claim.

Why choose Liberty General Insurance for your Royal Enfield bikes? A cruiser bike for the adventure seekers, the Bullet 500 is an upgrade to the Bullet 300. It comes with a 500cc unit construction engine with twinspark ignition. The engine is capable of a maximum torque of 26.1 bhp and 40.9Nm. 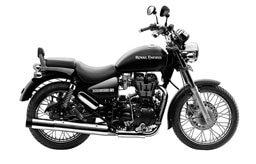 The Thunderbird 350 is the entry-level cruiser bike from the stable of Royal Enfield. It comes with a 350cc engine and is equipped to sail smoothly through rough terrains. The Thunderbird 500 is an upgrade of this bike. This is the first bike from the Royal Enfield brand that is specially designed for adventure. This bike comes with an all-new 411cc engine, also called the Long Stroke (LS) 410. As the name suggests, the bike is for those who want to get on their bike and head out for an adventure, even in the rough terrains of the Himalayas.

What does your own damage two wheeler insurance policy not cover?

When opting for an own damage two wheeler insurance policy, you must be aware of what benefits you’re missing out on. Let’s take a look at what this policy does not cover

Under the Motor Vehicles Act of 1988, it is mandatory for every two-wheeler owner to have a third party insurance. This insurance protects you against financial liabilities caused by any kind of damage to a third party in an accident. It includes taking care of medical bills for the treatment of injuries to a third party as well as repair and replacement of third party property.

Liberty General Insurance allows you to add extra benefits to your insurance cover. They are called add-ons. Some add-ons available to you are

How to buy an insurance policy for my bike online?

Should I buy third-party or comprehensive bike insurance?

When you buy a bike, we recommend that you go for a comprehensive bike insurance, as third-party two-wheeler insurance only covers third-party liability, and any damage to your bike will not be covered. You can choose one of several Liberty General bike insurance policies that cater to your requirements to ensure that you don’t feel the pinch in case your Enfield bike is damaged. You should also look to buy an add-on insurance policy cover so that you can secure the best possible protection for yourself. Some of the add-on policies include Depreciation Cover, Engine Safe Cover, Passenger Assist Cover, Gap Value, Key Loss Cover, Roadside Assistance Cover, Consumable Cover.

You will be required to submit the following documents: