If you a sportsbike enthusiast, a KTM motorcycle may just be the answer to your prayers. Get a superbike at a decent price with KTM. Don’t forget to insure your precious bike with a Liberty General Insurance (LGI) two wheeler insurance policy.

Austria-based KTM AG is a motorcycle and sports car manufacturer owned by Indian manufacturer Bajaj Auto. It was founded in 1934, though it did not receive global fame until 1992. The company has managed to retain to the title of the world’s largest motorcycle manufacturer since 2012.

The company has undergone various ownership changes but has stuck to its roots of being a motorcycle manufacturer. After Bajaj Auto purchased 49 per cent shares of the company, the company has manufactured a variety of motorcycles. Among the company’s notable models is the X-Bow, which is its first sports car.

The motorcycle manufacturer also produces small to medium capacity supersport motorcycles. These include the KTM RC 125, RC 250, RC 390 and the RC 8. The company shares its engine among its motorcycles which has given birth to the KTM Duke 125, Duke 250, Duke 390 and the latest Duke 790. It also manufactures the SuperDuke 1190, as well as a variety of different off-roading motorcycles.

KTM is also heavily involved in professional motorsports and holds competitive positions in motocross, supercross and MotoGP. KTM has won 37 cross-country rallies since 2003 and has won the FIM Cross-Country Rallies World Championship 15 times, most recently in 2015.

Why choose Liberty General Insurance for your KTM bikes? 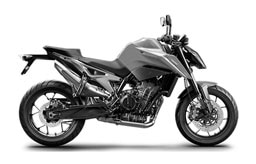 Often known as the ‘Scalpel’, KTM 790 Duke is KTM’s flagship sportsbike in India. It has a 799cc parallel-twin engine that is capable of pumping out a torque of 105bhp and 86Nm. It comes in a sleek and minimalistic design. 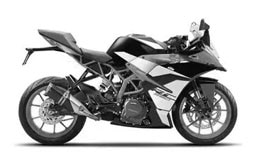 A popular sportsbike from the KTM stable, this bike sports a 373cc engine that can generate of a torque of 42.3 bhp. The bike comes with dual disc brakes. 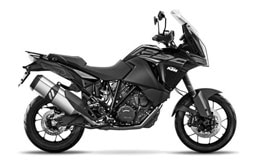 While the current generation of Super Adventure 1290 is not in sale in India, but KTM is likely to launch this bike in 2020 in India. The bike comes with a 1,300 cc V-twin engine that is capable of pumping a torque of 160 bhp and 140 Nm.

With the own damage two wheeler insurance policy, you can get a cover for your vehicle against any damages caused during an accident as well as theft of your bike. Any expenses arising out of an accident for the repair of the bike or to treat an injury to you, will be taken care of by Liberty General Insurance. However, this insurance policy will not cover third-party damage.

What does own damage to two wheeler insurance policy not cover?

A third-party insurance is mandatory according to law under the Motor Vehicles Act of 1988. The policy, as the name suggests, protects you against any expenses to treat or make repairs for a third party for damages caused by an accident involving your bike. It includes paying for treatment of injury to third party as well as damages to third party property. Riding on Indian roads without a Third-Party insurance is a criminal offence.

Liberty General Insurance allows you to add extra benefits to your insurance cover. They are called add-ons. Some add-ons available to you are:

Is it important to report an accident to the police for claim settlement purposes?

Yes. Ideally an incident of accident involving your vehicle, including theft, must be reported to the police at the earliest. A copy of the First Information Report (FIR) is required by the insurance agency to pass any claims. If there are incidents causing any third-party property damage, bodily Injury to rider or a third party or theft of the two wheeler, you should report it to the nearest police station as soon as possible. Retain a copy of the FIR for claim settlement purposes.

What does a cashless garage mean?

Every insurance agency has partnerships with garages across the country. Under these partnerships, any repair work by you can be done free of cost. The charges are paid by the insurance agency directly to the garage. These are called network garages or cashless garages.

LGI has a network of 4300+ garages in India where you can get your repair works done in a cashless manner. You can ask the customer support for the nearest network garage to avail of cashless claims. If you visit any other garage, you can retain the original bills for all charges and get the funds reimbursed from LGI.

How do I renew two wheeler insurance policy for my KTM bike?

You can easily renew your insurance for two wheeler from our website or app or directly via WhatsApp. By doing the renewal online, you will save a lot of time, contribute to the Go-green initiative, and also get a soft copy of the insurance policy. Those porting their bike insurance policy to Liberty General Insurance can visit here, and existing Liberty General Insurance customers can visit here.

While renewing, you can improve your bike’s protection cover by opting for few add-on insurance covers that LGI has to offer, including depreciation cover, consumable cover, GAP value cover, engine safe cover, road side assistance cover.